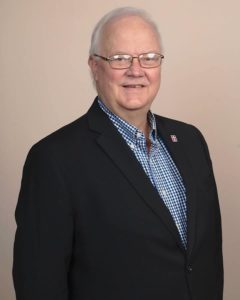 Jim Davids is the new Chief Counsel of the Justice & Freedom Law Center. Jim is a native Chicagoan who, after graduating from Calvin College in Grand Rapids, MI and Duke University School of Law in Durham, NC, returned to Chicago to begin practicing law. At church on a Sunday night in 1977 he met Sue, and after a two-year courtship they married. They raised four children in Chicago, and now have 12 grandchildren.

After 25 years defending doctors and hospitals in malpractice cases and trying cases ranging from employment to civil rights cases, Jim left Chicago to join the U.S. Department of Justice to help set up the Faith-Based Initiative. His work there included performing an audit of federal programs to determine how much faith-based organizations partnered with the federal government. After concluding his work at the Department, Jim was given a joint appointment in the Schools of Government and Law at Regent University, where he was also an assistant Dean. At Regent, Jim established the cornerstone worldview class in the School of Government, and taught this class and constitutional law. In the School of Law, he continued teaching constitutional law, and also taught appellate advocacy and trial practice. At Regent, Jim earned a PhD degree and also worked part-time practicing law. Jim has authored seven law review articles in constitutional law, and he recently finished a book on the worldview of Chief Justice Rehnquist and Justice Blackmun.

Jim has lectured throughout the United States and in Europe and Asia (Ukraine, India, Indonesia, Singapore, and Belarus) on the Christian View of Law and Government. Jim is licensed to practice law in Illinois, Virginia, and Florida (inactive).  Jim has been a member of the Christian Legal Society for decades, and has served on its Board and as its President.  Jim also served on the IFI board in the 1990s, and was the acting Executive Director for several months. Jim has also served on the board of the Family Foundation, which is IFI’s sister organization in Virginia.